I'm just a galadin who wants to be your paladin.

Anyone have any leads on what language orcpub files are written in? I don't want to build a file merger from scratch. 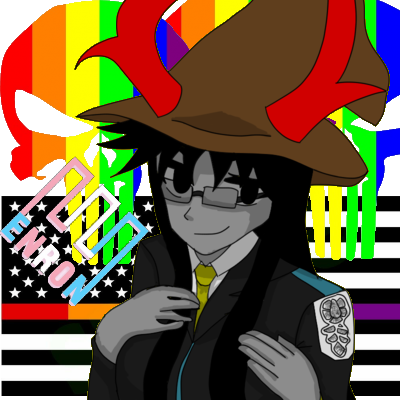 slave owners should be brutally murdered

The Czar is eating gold on his bread.

Turns out I'm going to be in a Shadowrun Podcast pretty soon, so that's exciting.

Taxes raking me over the coals.
A full 25% of my check.
Most of this going to bullshit military purchases.
But I'm not even mad at the taxes, I'm mad that even at my pay grade, I can barely afford the cost of living.

The cost of living shouldn't consume all of *anyone's* paycheck.

whenever i write a program

@minimalist_technician
I fail to see the relevance of this question, and it doesn't particularly interest me. Why are you asking about this?

It's going great! Players seem to be enjoying it.

"Bronzefist" is his name, and he replaces Frume and his order of the gauntlet.

The Necromancer at Old Owl well, is now a Gender neutral dwarf named Kostia Illmire, and they serve a group of 'Mud Sorcerers' from a more hostile material plane. (These replace red-wizards), and Kostia takes Iarno Albren under their wing as an apprentice wizard (replacing Abrazam Jos)

So much more too, gosh it's really a complete rewrite!

Oh gosh it's just so much to talk about!

A manic half elf who runs a "Luck Shrine" poorly in LMoP turns out to be a political spy from a group of assassins dedicated to directing the flow of history in the most utilitarian manner as possible, who is trying to spy on the Dragon cultists (Agent Canniker replaces Leosin the monk)

A half-troll/half-elf bouncer for the Ruested Pipe tavern in phandelver (where pirates hang) is secretly a member of a "Sages and Warriors" guild.

The Redcloaks are disenfranchised pirates from the Free Traders, working for Iarno Albrek (who secretly is a member of a group of Nobles trying to regain power from the Silver Syndicate.)

Silwar is trying to make the world better from the inside of the Noble's Alliance, and drives the plot.

After this caper is solved, a major Orc Settlement near Phandelver is attacked by "World Dragon Cultists" largely made up of civil-war-losers apologists who seek to end the world.

Orcs, goblins, hobgoblins (etc) are called 'Voguls" collectively, and are struggling to be recognized as a marginalized class.

The game starts (Lost Mine of Phandelver) with a plot from Ugidir, a "grey orc" (Vogul Militant Warrior group) who puts on pretenses of being a drow to gain access to the lost mine of phandelver, trying to wrest it from the Silver Syndicate member Gundrin + Crew. He hopes to arm a small batallion of Vogul-rights warriors for direct action.

Oh gosh they are wide sweeping . Lemme see what I can sum up.

Two major political groups in my setting are "The Silver Syndicate" a literal recently risen merchant's class that has over-mined Monarchy and Theocracy and "The Free Traders" a very loose collection of anarchist pirates that have very little in common with one another.

Also there was a recent human civil war, with two (symbolic) monarchs, under dragon banners. The sore losers are human supremacists.

With heavy inspiration and side quests from 3rd party modules!

Having a lot of fun re-writing the Tyranny of Dragons module to make it a lot more queer and anarchist, also suiting it to my D&D setting better.

We're already there.
It's already happening.
We're outgunned and under equipped.
Now, at least, I understand bwhy so many people went on as usual.
What else can I do?
I'm already stretched so thin.
It'd be so much easier to go fight something.
Fight someone.
Die doing something useful or Noble.
Gamble on freedom.
But it's simply not feasable.
What. Do.

But that's what I mean there's no rules regarding it it's not actually bound accuracy it's a complete lack of rules which place has the GM in an uncomfortable position of having to arbitrate player expectations.

yes the DM should basically do that for a lot of things but all those things should have clear guidelines.

And one of the guidelines is that wealth and wondrous items are not necessary.

I'm just a galadin who wants to be your paladin.