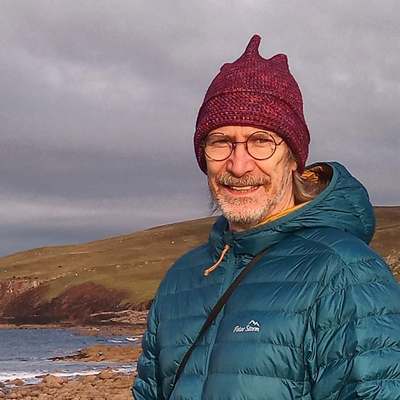 A Christmas walk in the hills for us, as we watch the weather over the mountains of Assynt,

@Palamie photos are a year or two apart. My teenage daughter loves to buy Skid an outfit for Xmas.

Yet to see if he gets one this year.

Once we are independent our whole identity will be reshaped.

Instead of all of us carrying this crazy regional identity of a greater England, Eastenders, English Premiership and cricket, we will will wake up to the reality.

Scotland is a magical massive and diverse archipelago of approximately one hundred inhabited islands. I’ve been lucky enough to retire early and travel widely around Scotland.

It’s most definitely not the place described by BBC Pacific Quay.

Trying to tell Skid that SANTA is a big guy wi a beard!

The biggest difference for me here is that following somebody means you actually get to see what they say. 👍. Twitter naw 👎

I’ve tried to follow everybody and most follow back. Others still might. Where this differs from Twitter is there are no algorithms showing you a small part of what has been said and no pecking order. Each voice has an equal say.

It’s genuine conversation in almost real time so you are seeing it all. None of that somebody said 12 hours ago crap. If you’re in the Twitter mindset and looking to have lots of followers and don’t follow back you might find the need for new strategies.

“Scotland’s grouse moors—the pleasure ground for a few thousand men—emit about 10m tonnes of carbon dioxide each year. That is nearly double the amount emitted by all the homes in Scotland.”

I you really want to find out from the media what’s going on you might want to travel to Macedonia then Serbia and Greece?

That way you can gradually expose your mind to the truth.

Interesting article though you might dispute some of the historical assertions.

In ancient Scottish tree rings, a cautionary tale on climate, politics and survival: A 1600s famine with echoes in the age of Brexit -- ScienceDaily https://www.sciencedaily.com/releases/2019/12/191217141543.htm

Explaining to Skid that the Tories have just banned dog walking.

This is the app I’m trying out on iPhone.