languages: 🇩🇪 🇬🇧 🇮🇹🇷🇴
pronouns: use whatever you're comfortable with

I'd like to write a pinned #introduction but the character limit here is bloody annoying.

Personally into TTRPGs, board games, video games, SF and some fantasy, some comic books. Lego. Music 🤘. Sometimes several at the same time.

Live with my wife and two kids in the lake region near Munich, Germany.

There, that fits and covers the basics.

Surely not all protestors are Nazis. But all of them rather march with Nazis shoulder by shoulder than wearing a mask while going shopping.
#Berlin2908 #b2908 #be2908

Protests in Berlin are not representing public opinion in Germany, but show the worldwide influence of Conspiracy Networks.

I never thought something like this could happen again. Reichstagsflaggen in front of the German Bundestag in #Berlin. Everyone who joins such "protests" is undermining democracy. Don't march with Nazis!
#b3008 #attilaHildmann #be2908 #niewieder #Reichstag https://www.theguardian.com/world/2020/aug/29/berlin-braces-for-anti-coronavirus-protest-against-covid-19-restrictions

The #Covidioten are already saying that a million people were at yesterday’s protest (there were max. 40,000). Here’s a photo of Pride in #Berlin, where there actually *are* a million people each year... So much fun and you don’t have to hang out with Nazi assholes. 🌈 #be2908🤡

Deeply ashamed of the pictures coming out of my country today. This is not what we stand for. #be2908

I am so fucking ashamed of my country.
Facists,Nazis and other people trying to raid the“ Reichstag“ is fucking unbelievable. #be2908

#be2908 #Reichstag I, as a german, am very ashamed for everything that happened in Berlin today. Those fascist tries to raid the "Reichstag" should not be possible!

I am ashamed to say that these images came out of my country today.

We teach our dark history so much in order to prevent such hate from ever taking over again, but these #be2908 protesters nonetheless tried to storm our Parliament alongside Neonazis.

The history of Nazis holding rallies in left-wing areas of Weimar Germany, instigating street fights, and then telling the press that only they could save Germany from the "violent communists" seems like an important thing for people to be studying right now.

I will never forgive Steve Bannon for what he did to me during Gamergate. I hope he rots in prison. https://twitter.com/geoffrbennett/status/1296440215326924805

I moved mastodon instances, and am not going to bother renewing the mastodon/twitter bridge. Which effectively means I've mostly given up on twitter here. I guess I'll check back once in a while, but don't count on it.

I've been in the #MozillaLifeboat since January since COVID-19 threw a lot of employer's hiring processes for a loop. If you're in need of a 20yr Linux sysadmin or 4yr network engineer without much cloud experience (but more than willing to dive in and learn it) drop me a line! 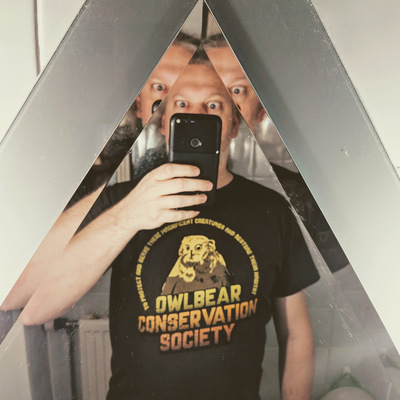 languages: 🇩🇪 🇬🇧 🇮🇹🇷🇴
pronouns: use whatever you're comfortable with

interpeer There is nothing here!